The Microsoft HoloLens is a lightweight augmented reality device used for training simulations for the U.S. Army.

As challenges on the battlefield become increasingly complex, the use of virtual and augmented reality in warfighter training is rapidly increasing with the U.S. Army at the forefront.

VR and augmented reality (AR) hardware is becoming more widely available to consumers, and more widely used with gaming and mobile technology due to the efforts of technology giants such as Microsoft, Facebook, Samsung, and Apple.

While AR offers amusement to consumers who catch Pokémon in Pokémon GO (which uses AR to simulate animated pets in the real world as viewed through the screen of a phone), VR and AR have much more to offer toward enabling warfighter readiness.

At the U.S. Army Combat Capabilities Development Command (CCDC) Chemical Biological Center, a team of artists and computer scientists are developing innovative ways to aid the chemical biological defense community and the warfighter through VR and AR.

VR training tools allow the trainee to learn and engage with training materials in a more interesting and immersive way, certainly more engaging than a typical classroom setting or training guide.”

VR and AR are recognized as preferred technologies for the U.S. Army to develop more effective next-generation training tools and environments to align with the Army Modernization Strategy.

“Our team along with other organic groups within the Army are exploiting next-generation tools and technology to advance synthetic training for the warfighter and chemical biological defense,” said Jeff Warwick, chief of CCDC Chemical Biological Center’s Interactive Software and Visual Media Branch.

Part of the Army Modernization Strategy is Soldier Lethality, which spans all fundamentals – shooting, moving, communicating, protecting, sustaining and training. The Synthetic Training Environment (STE) is a major pillar of Soldier Lethality, and will provide the future of training for not only the chemical biological defense community but the entire U.S. military.

“Our VR/AR projects are designed to client requirements, addressing specific situations, missions or equipment. These are realistic, immersive environments, which means the training done with these types of systems are very effective,” said Warwick.

One such client is the Center’s Advanced Chemical, Biological, Radiological, Nuclear and Explosives Training Team. They wanted to provide CBRNE units with realistic training that allowed Soldiers to learn without the risk of exposure to chemical biological threats. The solution was a VR training environment that made Soldiers feel like they were in a clandestine laboratory. 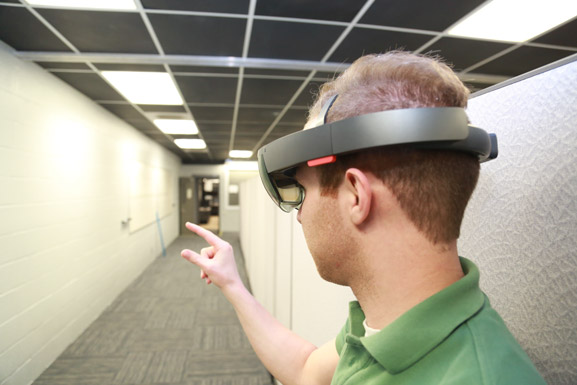 “VR training tools allow the trainee to learn and engage with training materials in a more interesting and immersive way, certainly more engaging than a typical classroom setting or training guide,” explained Lail.

The Center has already produced several VR/AR applications which provide new learning capabilities, including enabling a user to dissect a life-size model of an unmanned aerial vehicle in flight. Another application gives the user information through Microsoft’s HoloLens AR head-mounted display which relates to a physical chemical and biological detector the user can manipulate. The application walks the user through a step-by-step assembly of the physical detector’s various removable components and also provides an overview of the detector’s operation and status.

“These AR training tools allow novice users to perform assembly, maintenance, repair, or review directly on a device as if they were a subject matter expert,” explained Lail.

Once the hardware becomes suitable for fielding, training applications such as these could be utilized by the warfighter any place and at any time, making them true point-of-need training. These current applications are just the tip of the virtual iceberg. It is not currently known the extent to which VR/AR can be employed toward assisting and enhancing the warfighter.

“We could design a training, load it onto any number AR glasses and ship them to wherever they are needed,” said Jason Gitlin, the branch’s lead digital artist, “Better yet, we can adapt a program to the unique needs of, for instance, a special forces team, load up the glasses with the program, and send a set to the team to help them diagnose and solve a specific problem with a mission-critical piece of equipment.”

Across the Department of Defense, synthetic training tools are being employed to provide service members with the information and muscle memory necessary to enhance readiness.

“Through some of the training tools we’ve developed recently it’s clear Soldiers internalize the training and are better prepared heading into a mission,” Warwick said. “We’re excited to see what’s to come and the impact the tools we develop have on the warfighter.”

The Microsoft HoloLens is a lightweight augmented reality device used for training simulations for the U.S. Army.