Sprayable Decontaminant Slurry Could Be in Warfighter Hands Soon

Sprayable Decontaminant Slurry Could Be in Warfighter Hands Soon

After three demonstrations between March and June 2019, the slurry has more than met expectations and it could be in warfighters’ hands in as little as three to five years.

It’s been five years since Myers began working on the paint-like substance that can decontaminate an entire vehicle quicker and more thoroughly than the previous method of washing it down with soapy water, and it does so with a fraction of water.

“Just a quart-size sprayer filled with slurry can decontaminate up to 50 square feet of vehicle surface and have it back in action as fast as a warfighter can spray it,” Myers said. “The cool thing about the slurry is that it stays where you put it.” Decontamination can continue even when the vehicle is in use.

The slurry works by employing a blend of hydrolytic and oxidative chemistries with a small amount of water, solvent, and binder. Because the active ingredients react readily with both blister and nerve agents, it can detoxify a range of chemical warfare agents. In small-scale laboratory studies, Myers has put the slurry to test on the blister agent HD, commonly known as mustard gas, as well as nerve agents GD, or “soman”, and VX.

HD was used for the first time in 1917 during WWI by the Germans against the Allied Forces, causing more than 2,100 casualties. Although banned in 1925 by the Geneva Protocol, the garlicky or mustard-smelling agent was used recently in the civil war in Syria. In addition to blistering the skin, it can cause temporary blindness and even death by way of hemorrhaging of the lungs.

Odorless and tasteless, the nerve agent VX is one of the deadliest chemical warfare agents. It was used to kill the half-brother of North Korean leader Kim Jong-un.

“This was the first large-scale study for the slurry with neat, or undiluted, chemical warfare agent,” Myers said. “As technologies develop, they need to be proven out on a larger scale.”

“Just because we are testing in a large-scale chamber, doesn’t mean we requisitioned a Humvee and sprayed agent all over it,” Myers said. “Although the facility has the ability to accommodate that kind of work, whatever item we test with has to be disposed of in accordance with local, state, and/or federal regulations as hazardous waste. The test article needs to mimic the attributes of a full-scale vehicle, while being a manageable size for waste disposal.”

Instead of a full-sized vehicle, Myers designed an 18-in. X 24-in. miniature vehicle door with a window, door handle, seams, screws and threads – all of the things one would expect to find in a typical vehicle door.

Testing the slurry on a realistic scenario has to continue to advance the technology readiness level (TRL). Decon slurry currently sits at TRL 5 where researchers must demonstrate the project at an operationally relevant scale. Each readiness level thereafter moves the project closer to field testing. In the end, if everything goes well, decon slurry could be included in a program of record for the Army.

“For HD, after using the slurry, we could not find any contaminant at all, and a significant amount was applied initially,” Myers said. “With VX, we had one spot of residual agent, and that was a screw thread so it was a place where the slurry simply could not access, which is typical.”

Compared to the soapy water wash down, the slurry performed well.

“It was multiple orders of magnitude better efficacy and better removal using the slurry,” Myers said.

With that outcome, Myers and fellow chemist Janlyn Eikenberg found themselves on a plane to Hawaii the following March to demonstrate the slurry and brief the U.S. Army Pacific Command on the slurry’s development and use.

“The other technology integrated into our demo is called CIDAS – Contaminant Indicator Decontamination Assurance Spray,” Myers said. “CIDAS is an indicator technology. If you spray it on a surface, it will change color in the presence of agent.”

Using a simulant, the FLIR presenter marked the door Myers designed with a large “X”. She then sprayed the door with CIDAS, which indicated the presence of a contaminant by turning red.

“We then sprayed the door with the slurry. There is a waiting time associated with the slurry. You need time for it to react. We then rinsed off the slurry and applied the CIDAS again. This time, the indicator did not change to red, indicating decontamination was successful,” Myers said.

With success in Hawaii, Myers and Eikenberg demonstrated the slurry’s capability in June, in Germany, once at Ramstein Air Base to the U.S. Air Forces Europe and another in Grafenwoehr to the U.S. Army European Command Chemical Biological Radiological Nuclear Explosive Detachment. 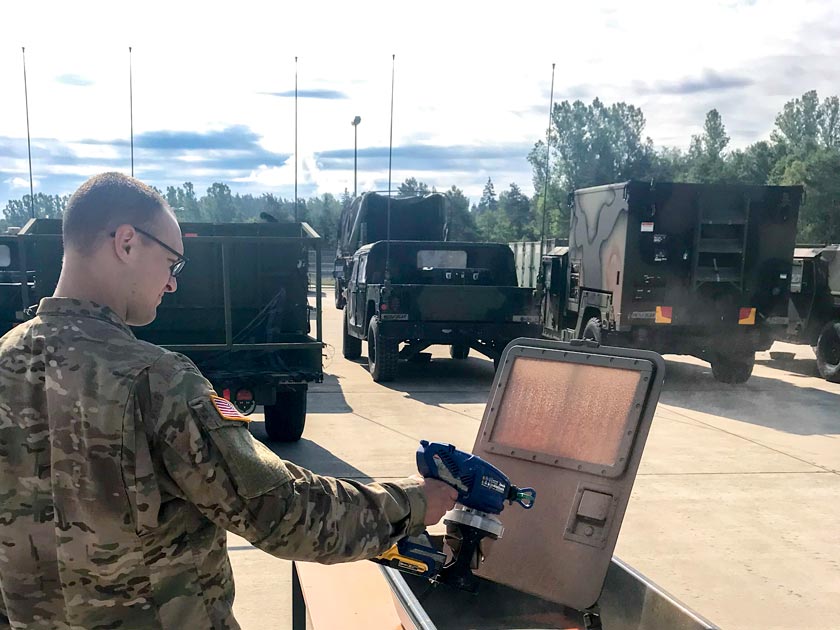 The whole idea behind tactical decontamination is that Soldiers could decontaminate a vehicle quickly and get back in the fight and that goes toward Army readiness,” Myers said. “Without the slurry, you’re basically out of commission until a decontamination unit arrives to do a soapy water wash. The point is to get warfighters and their equipment back in the field as fast as possible, and the slurry does that.”

Currently, those decontamination units rely on hundreds of gallons of water – something that can be hard to find in some environments or have at the ready. Containing 10 percent water, the slurry eliminates that need.

Not just the commands were impressed by the slurry’s performance. DTRA is also enthusiastic about Myers’ product. They have committed to providing funding for the design of a custom and battle-hardened sprayer for the slurry. Up to now, the slurry has been demonstrated with a commercial-off-the-shelf paint sprayer.

Even more good news has come from Myers’ demonstrations. Another private sector company will soon enter into a cooperative research and development agreement with the Center to openly share information in an effort to refine the formula and advance the slurry so that it can be in the hands of warfighters in the next three to five years.