Depending on the mission, a Soldier carries about 75 pounds of gear that includes head, weapon and body subsystems. That burden may increase with the complexity of the mission. When facing possible chemical exposure, a breathing apparatus and other protective equipment can encumber warfighters, potentially making them less effective.

It’s Peterson’s job to figure out how to protect warfighters while decreasing their overall equipment weight.

Part of an In-house Laboratory Independent Research (ILIR) project and funded by the Defense Threat Reduction Agency (DTRA), Peterson, working with Professor Thomas Epps, III at the University of Delaware, has found a more secure method to integrate MOFs with polymers. 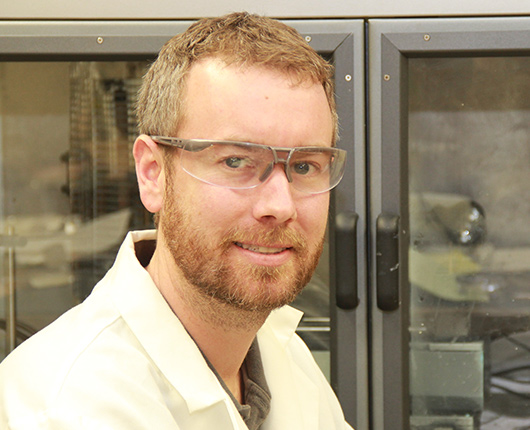 “Basically, all equipment the warfighter wears is polymer based,” Peterson said. “All clothing is made from polymers. Rubber masks, boots and gloves are all polymers as well. Kevlar, the material used in bullet proof vests, is a polymer. So if we can modify these systems to get us chemical and biological protection while retaining their underlying structural properties – that is a win.”

MOFs are active against chemical warfare agents, and polymers are a conduit to incorporating that activity into textiles and other protective gear. Putting the two substances together makes sense – except they make messy connections.

“They aren’t similar enough so they create defects at the interface,” Peterson explained.

Those defects or gaps at the interface allow opportunities for chemicals to break through the MOFs’ layer of protection. Besides the unsteady relationship between MOFs and polymers, MOFs present another challenge.

“The problem with the MOF we’re working with, CuBTC, is that it is not stable to moisture. If we used it as a filter it would constantly be exposed to moisture because there is humidity in the air and moisture in the breath of the warfighter, the structure of the MOF would break down.” If woven in a suit, the MOF would also break down when exposed to humidity or sweat.

While Peterson didn’t quite stumble upon a solution, he does admit that solving the problem came to him serendipitously.

Made of metal nodes that are connected by organic linkers, Peterson says tuning the nodes allows researchers to change the pore structure and size, the surface area, functionality and chemistry of the material. “They are really good in terms of being able to target certain chemical interactions. In our case chemical warfare agents and toxic industrial chemicals.”

Peterson substituted one of the MOF’s linkers, using an amine group link instead of a carboxylic acid one. “You can react the amine group and attach other molecules in a process called post synthetic modification.”

Because some polymers can be incompatible with the MOF, post synthetic modification for these types of materials is important.

“The idea behind the post synthetic modification in this case is that you can modify the amine functional group with something that looks like a polymer,” Peterson explained. “When you mix the polymer and the modified MOF together they’ll have better interaction. The interface will be much more compatible.”

While attempting to create a breathable rubber, Peterson added the amine group and hydrophobic tails to the CuBTC believing it would make the CuBTC more amenable to integration of polymers. “We found out it was stabilizing the MOF as well. That’s actually a bigger deal.”

Peterson says there are two reasons why his findings are significant. First, ammonia is a chemical that is part of testing requirements for masks and collective protection filters. His research shows that the amine group stabilizes the MOF to moisture, yet it retains the same high ammonia reaction capacity. Second, the amine group makes the MOF more compatible with polymers, allowing Peterson to move forward.

“We can begin conducting studies to see if the MOF will still block agent, wick moisture from surfaces like the skin and remain stable,” Peterson said.

Success in this area could benefit the warfighter in a number of ways such as providing a more efficient filter with a broader array of capabilities than current filters.