Sometimes, focusing on details can lead to understanding the bigger picture. That’s the approach Kyle Glover, Ph.D., and his team at the U.S. Army Combat Capabilities Development Command (CCDC) Chemical Biological Center are using to further his research in micro physiological systems, also known as Human-on-a-Chip.

“There are researchers and companies out there whose main function is to create a full physiological system with multiple target organs including the lungs, liver, kidney and heart all connected and working together to test the toxicity of certain compounds,” said Glover, “The other approach is to become much more sophisticated with individual organs and that’s what we are funded to do.”

With joint funding from the Defense Threat Reduction Agency and the Defense Advanced Research Projects Agency (DARPA), the Micro Physiological Systems Rapid Threat Assessment (MPS RTA) project has come far enough to open a new lab at the Center in January of 2020–a lab that doesn’t include animals.

“Our work concentrates on the functions of multiple types of liver cells and eliminates the use of animals for research,” Glover said.

Under the co-funded project, Glover, Tyler Goralski, Ph.D., and Jennifer Sekowski, Ph.D., are charged with transitioning to the Center two MPS systems that came to the market in 2019, and then using those systems to examine human cells from the top down via leading-edge cell and molecular based methods.

“Those MPS companies have mastered the liver, so that’s the starting point for our models,” Glover said.

Moving from multiple organ systems to one organ takes human-on-a-chip to organ-on-a-chip. Producing cultures or organoids that replicate the entire physiology of the liver reflects the sophistication Glover seeks.

“These types of systems provide researchers with more human-like cultures than what they used to use 20, 30 years ago when we could grow human cancer cells in a dish, but they weren’t representing what happens physiologically,” Glover said. “Now we’re growing fully functional normal cells in physiological conditions, so it has a lot more potential. Human tissue to start is really the solution.”

“You have a layer of hepatocytes. You have an endothelial cell layer and you actually have enough space in the chip membrane to have Kupffer cells to replicate an immune response, and stellate cells to replicate liver fibrosis,” Glover explained. “It’s pretty state of the art.”

The layers of multiple cell types–called three-dimensional cells–are a boon for researchers.

“The idea of three-dimensional cells has changed since ten years ago when we were growing balls of cells and calling them three dimensional. They were better than a 2D culture, but they were a ball of potentially the same cells and we were limited in the kind of information we could derive.”

Glover said that in the past, two-dimensional cell cultures, in conjunction with colorimetric assays, could help researchers predict some compound concentrations to be acutely toxic just by dosing those cells and then exposing them to a colorimetric toxicity assay – cell dyes that indicate a loss in viability after exposure.

“At the end of the day, we could at least tell you if something was toxic or not, but we had no idea to what degree or why it was toxic.”

Now that cells have more structure and flow, allowing them to behave more human-like, scientists are learning more.

Glover’s research into replicating the physiological functions of the liver on a chip comes down to solving a Department of Defense and, ultimately, a warfighter need.

The odds of warfighters encountering unknown substances grow. A micro physiological system can provide Center researchers with a pipeline to analyze the molecular events that occur with an unknown agent.

“While the MPS can help us answer questions quickly like how does the unknown act on human cells, and do the cells react in a way that looks like a known compound, we can also use those same human cells to rapidly model the molecular mechanism underlying that behavior,” Sekowski said.

Under the rapid threat assessment portion of the MPS-RTA project, Sekowski and others in the multi-omics team (Trevor Glaros, Ph.D.; Elizabeth Dhummakupt, Ph.D.; and Phil Mach, Ph.D.) can answer more detailed questions such as the nature and timing of the molecular target interactions, do these molecular targets have potential as biomarkers for detection or diagnostics, and can they be addressed with known countermeasures? Using measurements of gene and protein expression and the metabolome, the RTA team is able to rapidly model a complete mechanism of actions of the unknown, and share that data with other collaborators within the Army who will then develop novel countermeasures.

“This makes decision making quicker by orders and orders of magnitude,” Glover said. “That is the biggest selling point here. It’s the rapid response element. Right now, if you had something truly unknown come along, it may take one to two years before we can determine the level of exposure that we need to protect against.”

This combined MPS-RTA approach will help researchers characterize more compounds simultaneously, Glover believes, with a two-year research period yielding the results of 10 compounds instead of just one.

“We want information out quicker and more compounds through the door. Funders want to see research in applied fashion. They want to see this put into action,” Glover said. “We’re shooting high. That’s a dramatic improvement.”

The ability for this team to reach high is supported by its perpetual quest for professional development. Center scientists recently attended training at Emulate, Inc., a Boston company that recreates true-to-life human biology systems. Their founders pioneered organ-on-a-chip technology at the Wyss Institute for Biologically Inspired Engineering at Harvard University. Follow up training sessions have been scheduled at Center laboratories to prepare researchers to transition technology to modernized capabilities for the warfighter. 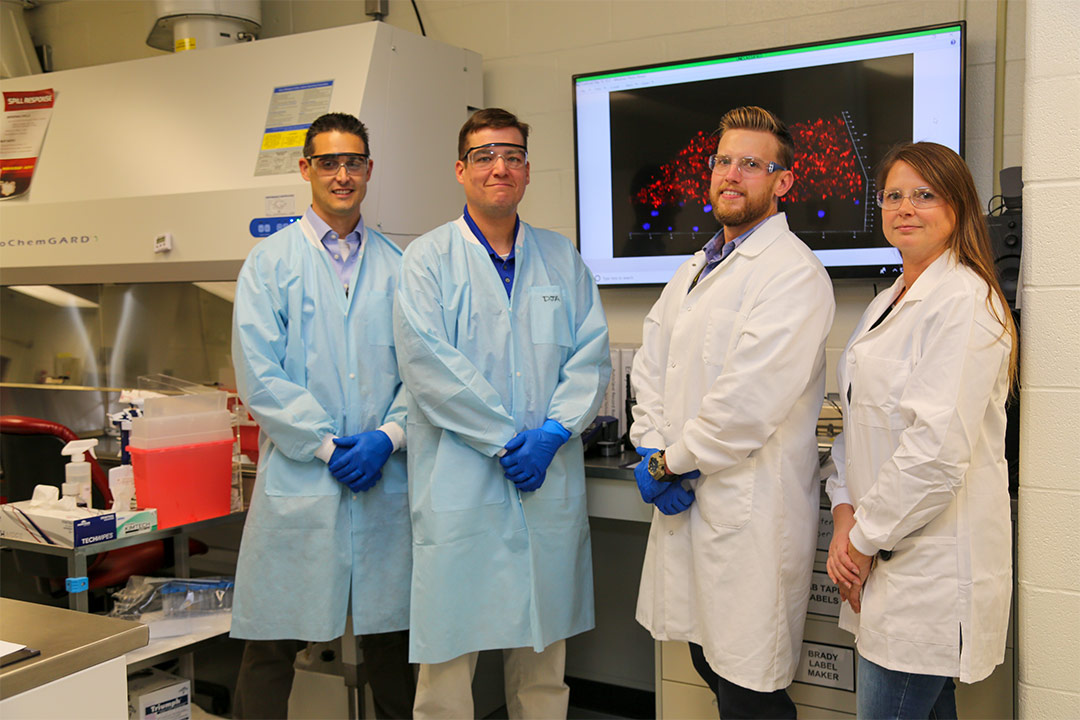