Sprayable slurry can be used on equipment, vehicles

A sprayable decontamination slurry developed by scientists at the U.S. Army Research, Development and Engineering Command Chemical & Biological (RDECOM C&B) Center is entering the next stage of its development and will soon be tested on a larger scale beyond the laboratory.

The slurry is a highly effective decontaminant and works through two mechanisms: hydrolysis and oxidation. The slurry is designed for decontamination of equipment and vehicles – like the fender of a Humvee – but not skin.

“This is designed for immediate, material decontamination,” said Joseph Myers, an RDECOM C&B Center research chemist. “Theoretically, let’s say there are Soldiers in the field and their Humvee is contaminated with chemical warfare agent. After getting to safety, they can mix up the decontaminant slurry, spray it on the vehicle, and drive back to the base.”

Under the current methods of material decontamination, platforms and personnel would have to leave the fight and use vast amounts of water and resources to be rendered safe. When deployed, the decontamination slurry will provide more efficient and effective decontamination for vehicles and equipment on the battlefield.

“This new technology will decrease the time and resources needed to respond to an attack, allowing units to maintain their momentum and increase their effectiveness on the battlefield,” explained Maj. John Williams, assistant product manager for science & technology portfolio integration. “Because of the versatility of the slurry and its effectiveness on multiple surfaces, this new technology could enable all future Army systems to operate in a contaminated environment, including new ground and air platforms.”

In the coming months, the capability will be rigorously vetted to confirm that its laboratory-level efficacy is retained in the field. In May, the slurry underwent large-scale testing in RDECOM C&B Center’s chemical agent and explosives test chambers. Then, in September, Myers is taking the slurry to Joint Base Lewis McChord for a demonstration in which scientists will put emerging technologies like the slurry directly in the hands of warfighters.

If you were to apply this as an immediate decon – within 15 to 30 minutes – you let it sit on the material for four hours, you get 99.9 percent removal for blister and nerve agent”

“They provide feedback, to say what they liked and what they didn’t like,” Myers said. “We’re going to get actual end-user feedback, and then we’ll be able to re-optimize what we’re doing to better fit the needs of the warfighter.”

Resembling a thick paint, the slurry is a solid-liquid hybrid and may require a special sprayer. Myers thinks the sprayer could resemble a pump-action pesticide sprayer or maybe a backpack sprayer similar to a fire extinguisher.

Thus far, the U.S. Army Research Laboratory has assisted by providing insight into paint formulation ingredients that would make the slurry more paint-like. RDECOM C&B Center’s Advanced Design and Manufacturing Division was recently able to take the slurry into its automotive spray booth and conduct a successful spray demonstration.

Myers is confident in the slurry’s effectiveness.

“If you were to apply this as an immediate decon – within 15 to 30 minutes – you let it sit on the material for four hours, you get 99.9 percent removal for blister and nerve agent,” he said. “The slurry achieves this efficacy through its combination of hydrolysis and oxidation.”

Some agent can be decontaminated through hydrolysis but not oxidation and vice versa, but by combining the processes, the slurry is more universally effective.

“Zirconium hydroxide works by a process called hydrolysis,” Myers said. “Through the optimization process, we’ve added another chemical into the mix that promotes oxidation. With a blend of hydrolytic and oxidative chemistries, the slurry has the ability to detoxify a wide range of chemical warfare agents.” 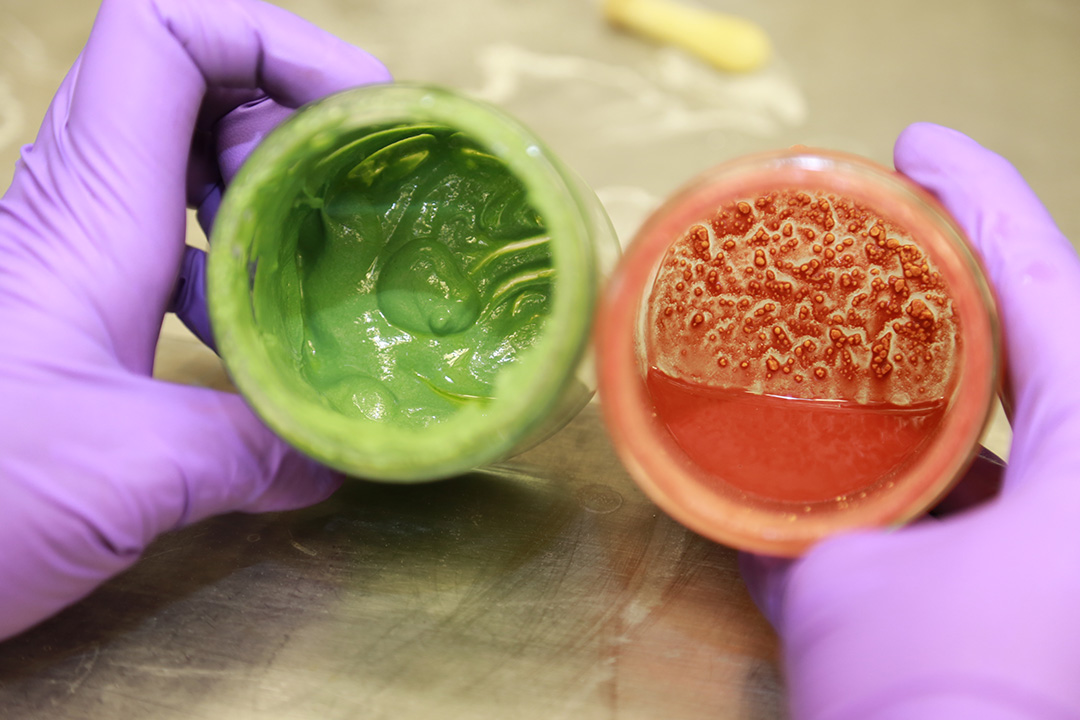 The slurry, a solid-liquid hybrid, resembles a thick paint.

This blend was identified by experimenting with different ingredients to determine which would be most effective in the laboratory.

“The primary component of this slurry is called zirconium hydroxide,” Myers said. “We took this substance, which is like a fluffy, white powder, and we mixed it with kerosene, with the assumption that kerosene would be available in the field. Mixed together, the components made a decontamination slurry.”

Myers later found that sulfolane, a solvent, would make a better carrier liquid than kerosene, because it promotes the extraction of agent from materials, which allows, the slurry’s other ingredients, like zirconium hydroxide, begin to hydrolyze or oxidize with the agent. “We swapped out the kerosene for a new solvent, sulfolane, and that did a better job of removing agent that soaked into materials,” Myers explained. Sulfolane has a high flashpoint, which makes it logistically favorable for transport, Myers said.

Funded by the Defense Threat Reduction Agency, the capability is a year or two away from being deployed, Myers said. “This has a high probability of being provided to the warfighter,” he said. “It’s highly effective, it’s easy to use, and none of the ingredients are particularly hazardous.”