A member of the West Virginia National Guard 35th Civil Support Team wears a prototype of the CCDC Chemical Biological Center respiration protection system as he performs a mock chemical materials investigation of a building.

More Time in the Hot Zone

More Time in the Hot Zone

When an industrial accident releases toxic industrial chemicals, the first responders are usually that state’s National Guard civil support team (CST). They suit up in full-body protective gear and enter the hot zone. One of the major challenges they face is how long their respiratory protection system allows them to stay there.

Currently, responders often rely on a closed-circuit self-contained breathing apparatus (SCBA) within a full protective ensemble which is hot, heavy and thirsty – heat builds up inside it, it weighs 36 pounds, and the wearer cannot drink water while in it. It has a four-hour use limit and requires wearing a bubble suit that restricts motion and increases thermal burden on the user.

A ‘Closed System’ Closes in on Time

“The ‘closed’ in closed system is that the user inhales and exhales on the same breathing loop, no exhalations are made to the outer environment. But it comes with a four-hour time limit,” said Jon Sampson, a U.S. Army Combat Capabilities Development Command (CCDC) Chemical Biological Center mechanical engineer. He is the project team leader for the research in designing the replacement system, known as the Full Spectrum Respiratory Protection System (FSRPS).
“Civil support team responders have told us that the four-hour time limit in the current system really reduces their effectiveness,” Sampson said. “When they suit up they have to do equipment checks and then get to the mission site, and upon leaving the site have to be decontaminated, all the while using up time within that four-hour window. On average, they have only one hour in the hot zone.”

Also, the problem of heat stress in the current system can be reduced by using ice to cool the breathing loop, but ice is very heavy, logistically complicated to supply, and it melts fast. And, the need to rehydrate during a mission is not addressed at all.

Presented with these limitations, the CCDC Chemical Biological Center design team got to work. “We knew we had to center our solution around mission availability – more time in the hot zone. We also knew we had to reduce weight, lower the internal temperature, and get rid of the need for ice,” said Sampson. “So we teamed up with one of our sister Army research laboratories, the CCDC Soldier Center, and used a couple of their design innovations. These included adding a streamlined, body-forming uniform with built-in chemical agent protection and a tube for hydration to our system. 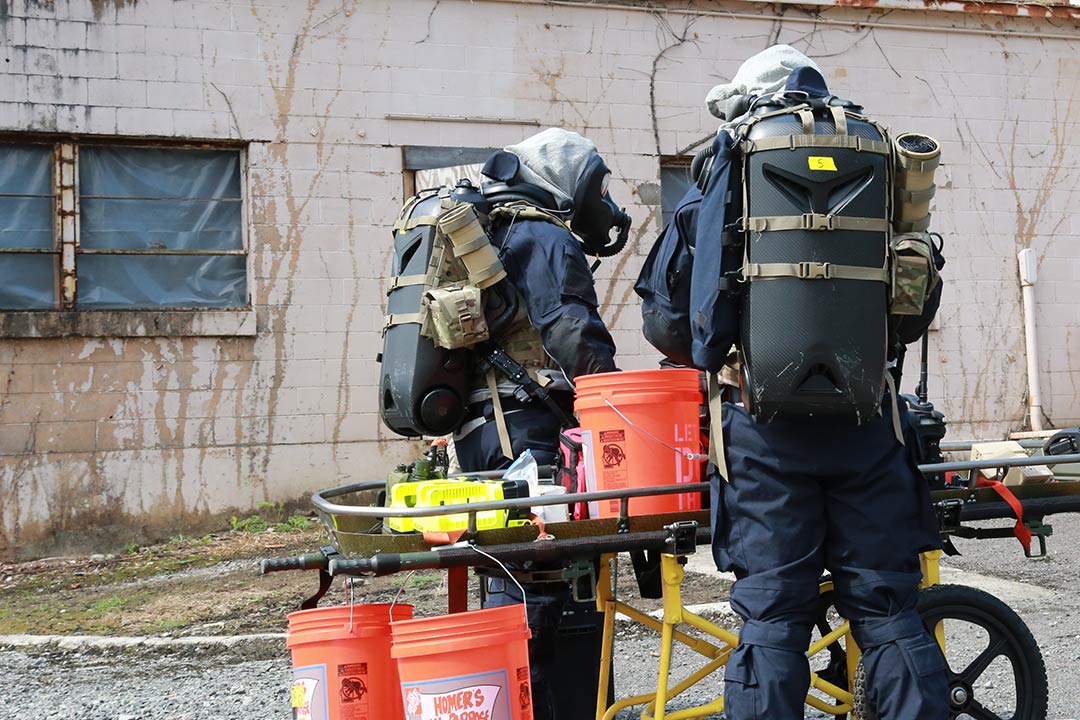 The team also used an existing technology when they added a cooling plate to replace bags of ice. They even added miniature fans. They were able to further reduce weight by incorporating ultra-high-pressure gas cylinders which can hold the same amount of oxygen in a much smaller and lighter container. The team fitted all the external parts together in a compact, easy to don and remove backpack weighing only 24 pounds.

However, the real breakthrough that dramatically increased time on site for CST members was to employ two different respiratory protection modes in one system, making this a combined unit respirator.

In “PAPR” mode, a powered air purifying respirator uses a fan to push ambient air through the filter, purifying it as it enters the suit and maintaining positive pressure. It can be used for eight hours. Adding PAPR to the closed circuit gives operators up to 12 hours of protection.

Closed-circuit SCBA mode uses the existing closed-circuit technology of carbon dioxide absorption from the breath stream combined with injections of oxygen to maintain the optimal levels of oxygen while keeping carbon dioxide to a minimum. It also replaces ice with a much lighter cooling plate and uses the M53 mask with its hydration tube. It can be used for three hours, but the design team is confident that it can be extended to at least four with some further design optimizations.

By switching between modes in response to the threat level around them, operators no longer have to dig into their precious four hours of closed-circuit time while going through equipment checks, while being transported to the site and during decontamination.

The entire effort was funded by the Defense Threat Reduction Agency (DTRA) and they had a big test waiting for this system. Called the Chemical Biological Operations Analysis (CBOA), it was established to test emerging chemical and biological defense technologies. It was held on Aug. 22 at Camp Dawson in Kingwood, West Virginia.
Industry, academic, and government laboratories were invited to bring their latest chemical and biological defense prototypes to place in the hands of warfighters to use in realistic missions. The military operators then provided candid feedback on the prototypes’ usefulness and recommended improvements.

During CBOA, two teams from the 35th practiced investigating an abandoned structure containing a series of rooms for the presence of CBRNE materials. One team wore the current system, the other wore the FSRPS prototype. The team with the FSRPS prototype had all the advantages of available drinking water, a body cooling system, more time on site, and no bubble suit. These operators reported back that they were very satisfied with all the advantages offered by the ensemble and were very glad to have the longer mission duration.

With this phase of prototype development completed, Sampson and his design team will work with manufacturers in private industry to develop a next generation prototype that combines all the innovations they have created thus far plus further refinements based on their latest laboratory-generated performance data. This next generation prototype will be subjected to rigorous field testing, and that data will be incorporated into the design of the final system. Ultimately Sampson looks forward to the system’s widespread use by National Guard CSTs all over the nation.

A member of the West Virginia National Guard 35th Civil Support Team wears a prototype of the CCDC Chemical Biological Center respiration protection system as he performs a mock chemical materials investigation of a building.