Joe Myers, chemist and primary investigator of CHAD, places a pocket knife into one of the four SIV chambers.
Photos by Shawn Nesaw.

Throughout its more than 100-year history, the U.S. Army Combat Capabilities Development Command (CCDC) Chemical Biological Center has been dedicated to finding ways to protect the warfighter from exposure to chemical warfare agents like mustard gas. Many times, when looking at decontamination methods, scientists may in effect fight fire with fire by combating contamination with the use of other strong chemicals.

“The CHAD process can remove the chemical warfare agent within 24 to 72 hours,” said Joseph Myers, chemist and CHAD primary investigator.

CHAD consists of placing a contaminated item into an enclosure and increasing the temperature of the chamber to drive off any contaminants. The chamber used for CHAD research is a one-cubic-foot small item vapor (SIV) chamber, about the size of a plastic milk crate or a military radio communications system. The chamber has a slow air flow through it, which carries away the contaminants from the item and allows for characterization of the effluent air stream.

Air flow in the SIV chamber.

“For example, if HD (mustard agent) is being removed from an item, and the resulting air stream contains HD, it’s reasonable to assume that evaporation of the contaminant is occurring,” said Myers who received a degree in chemistry from Towson University. “If, however, a different chemical is present in the air stream, for example a degradation product of HD, we know that a chemical reaction is occurring.”

“Although hot humid air isn’t technically ideal for sensitive electronic equipment, it is not nearly as destructive as traditional decontamination procedures that use bleach,” Myers said. 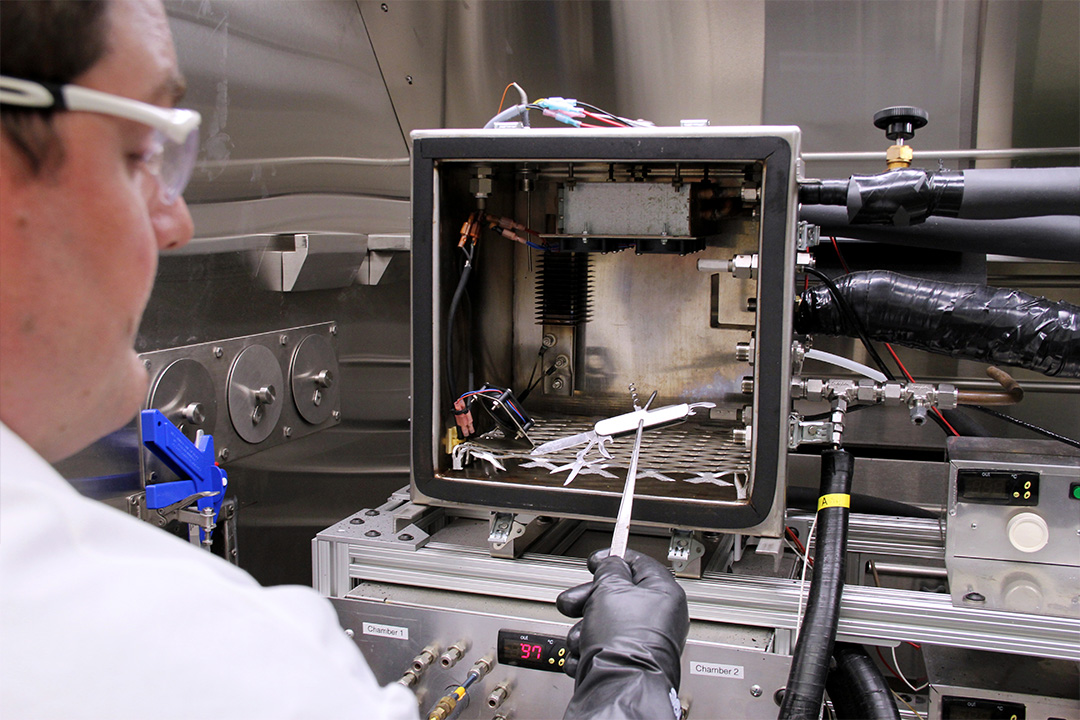 CHAD research data indicates that the decontamination method removes at least 99.9 percent of HD and VX contamination over a period of 24 to 72 hours – even from intricate items like pocket knives.

“The hope is that important assets could be cleaned and reissued to warfighters after contamination has occurred,” Myers said.

Lots of small items like weapons and goggles could be decontaminated at once using something about the size of a dishwasher.

Aside from its practical applications, CHAD can also play a role in consoling families of fallen Soldiers.

With the global threat and increased use of CWAs, handling of contaminated materials after an encounter has the potential to result in further exposure. “CWAs are acutely toxic substances, so a small amount of exposure can result in fatality,” Myers revealed.

According to information contained in Myers’ research, warfighters may carry personal effects with them during deployment. These items could become contaminated if the warfighter becomes exposed to CWAs during his/her mission. In the event of death, the casualty’s personal effects ideally would be returned to loved ones as keepsakes. CHAD has proven effective in decontaminating personal effects like uniforms, belts, pocket knives and coins, without destroying the items, so items could potentially be safely returned to loved ones without risk of injury due to exposure.

Myers’ next challenge with CHAD is to reduce the time requirement for decontamination to eight hours.

“We’ll be using solvent as a pre-treatment to begin releasing agent from the material prior to heat,” Myers said. “The solvent and the heat should speed the process.”

The focus for Myers and his team with CHAD primarily has been on mustard gas and nerve agent VX. Soon, studies will begin to evaluate the possibility that CHAD can be used to decontaminate items exposed to opioids.

Joe Myers, chemist and primary investigator of CHAD, places a pocket knife into one of the four SIV chambers.
Photos by Shawn Nesaw.