Among the technologies being tested during the event was an autonomously cued aerial detection system developed by the U.S. Army Research, Development and Engineering Command Chemical & Biological (RDECOM C&B) Center. It includes the Deep Purple automated drone and the Array Configurable of Remote Network Sensors, or ACORNS, on-board chemical and biological detection system. The system is compatible with the Defense Threat Reduction Agency’s (DTRA) Integrated Early Warning (IEW) system, and has been demonstrated as part of the IEW Advanced Technology Demonstration (ATD). 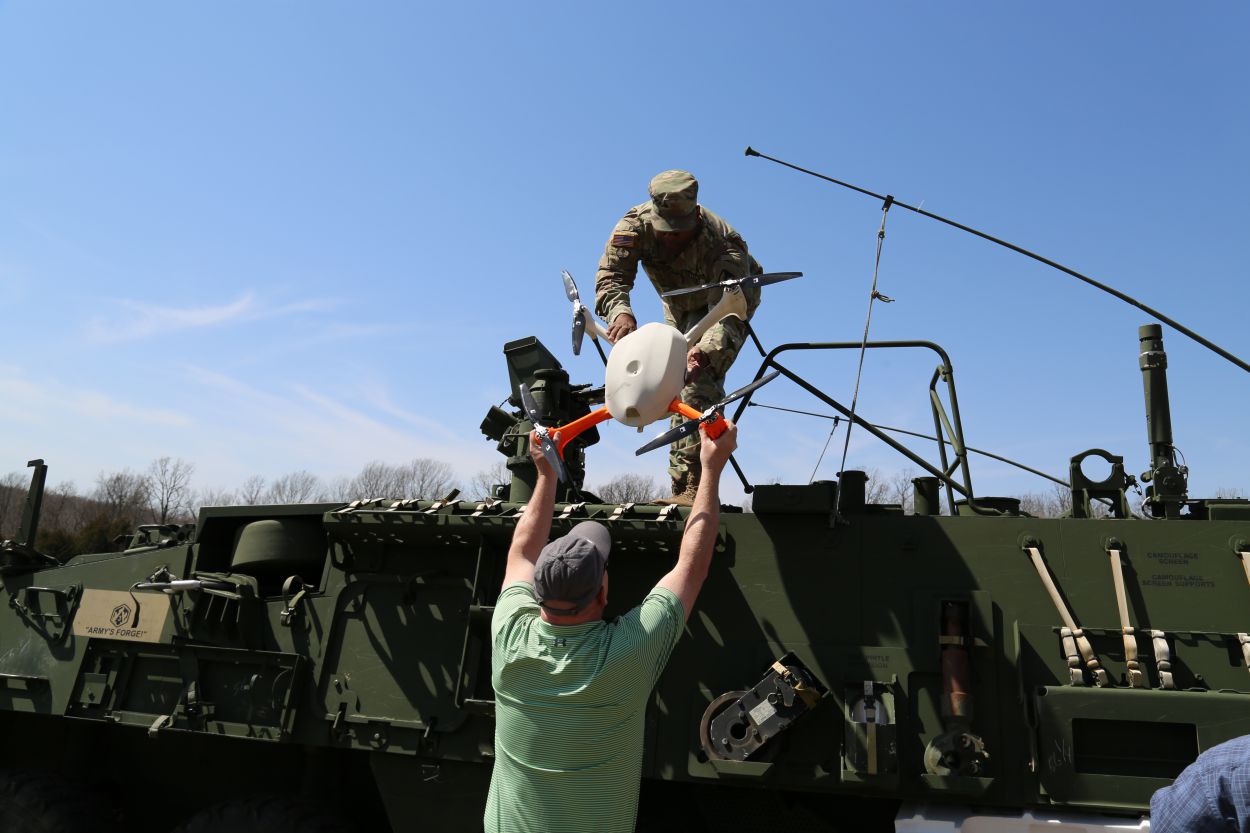 The RDECOM C&B Center team places the Deep Purple unmanned aerial vehicle on top of a M1135 Nuclear, Biological, Chemical Reconnaissance Vehicle prior to the demonstration.

The detection system uses a Light Detection and Ranging, or LIDAR, standoff detector to identify a plume of particles in the air that could be harmful to soldiers. This detection triggers the layered sensing system to autonomously launch the Deep Purple drone carrying the ACORNS detector. The drone flies to the plume, samples the air, and reports findings back to decision-makers in real-time.

“Our Deep Purple with the ACORNS can go out a distance and identify possible chemical, biological, and radiological threats, collect information at a distance, and keep Soldiers safely out of harm’s way,” said Mark Colgan, Unmanned Systems Team lead at the RDECOM C&B Center.

During test runs of the system, the team used a smoke machine to create a plume of smoke more than 300 yards away from the LIDAR detector. “We have been able to generate a smoke cloud, find the smoke cloud, and autonomously send a UAV into that cloud,” said Fiona Narayanan, acting NBC Battlefield Integration Branch chief at the RDECOM C&B Center. “And then, not only send it into the cloud to find where the highest concentration is, but continue to track that cloud. That piece is really nice because then you can determine where the entire contamination area is.” 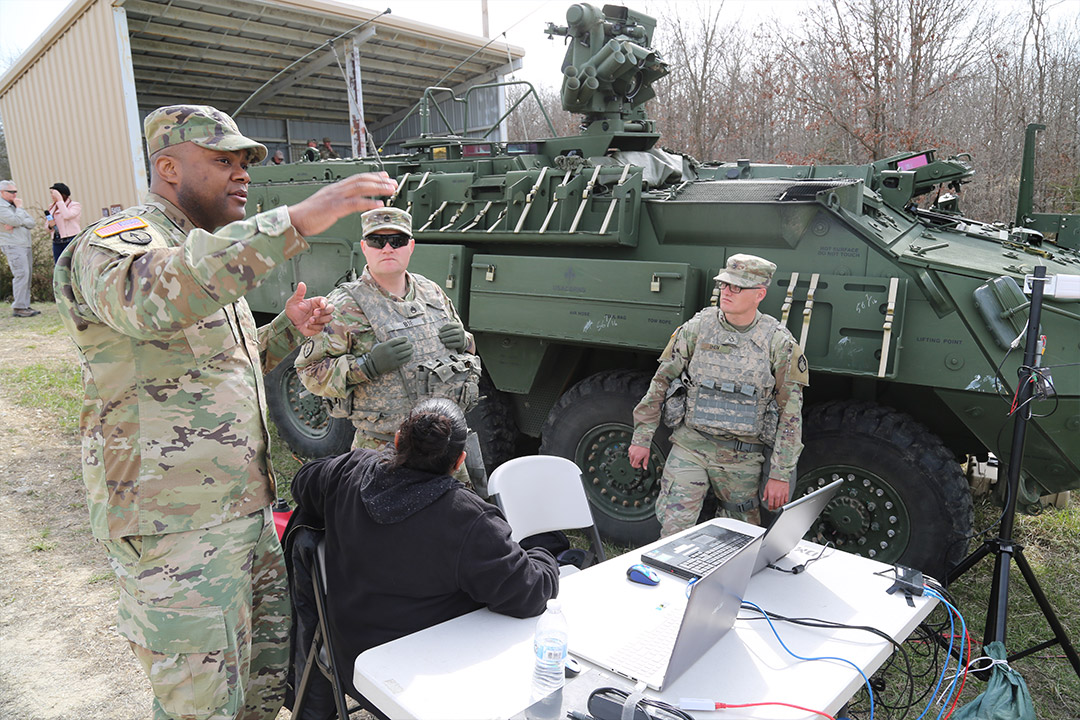 Major John Williams (left) prepares the team for the demonstration at MSSPIX.

In the hands of Soldiers

Beyond field experimentation with the detection system, the real value of the MSSPIX event is the ability to get emerging technology into the hands of Soldiers. During the exercise’s first week, Soldiers from the 63rd Chemical Company, 2nd Chemical Battalion, 48th Chemical Brigade spent time with RDECOM C&B Center researchers training in operation of the system and returning feedback about how the system could be improved to provide the support they need in the field.

“We are really trying to fall in line with the Army’s goal of more demonstrations, more prototypes, and getting input from the Soldiers sooner rather than later, so we can get a better product into materiel development,” said Maj. John Williams II, assistant product manager for science and technology portfolio integration at the RDECOM C&B Center.

Initial feedback from the group of Soldiers working with the development team was positive.

“This is beneficial and it will save us a lot of time. It’ll keep troops out of the hazard and in the CBRN world, that’s kind of what we worry about,” said Pfc. Patrick Uhen, U.S. Army 63rd Chemical Company, 2nd Chemical Battalion, 48th Chemical Brigade. ”It can be a lot faster and a lot more accurate and I can send it to places I might not be able to drive.”

The MSSPIX exercise concluded with a demonstration of the technology for a group of distinguished visitors from various Department of Defense organizations. The demonstration gave researchers an opportunity to showcase their work and explain to senior leaders how the technology aligns with current Army priorities.

RDECOM C&B Center’s Engineering Director, Michael Abaie, attended the senior leader event to speak with Soldiers who worked with RDECOM C&B Center technology and to convey how important this program could be for the Army’s strategic goals. “This is all about modernization,” said Abaie. “It’s about how we start achieving and overcoming and overmatching our near-peer competitors. Our ability to get new equipment, new technologies, and new capabilities to the warfighter as quickly as possible allows us to get over that hurdle.” 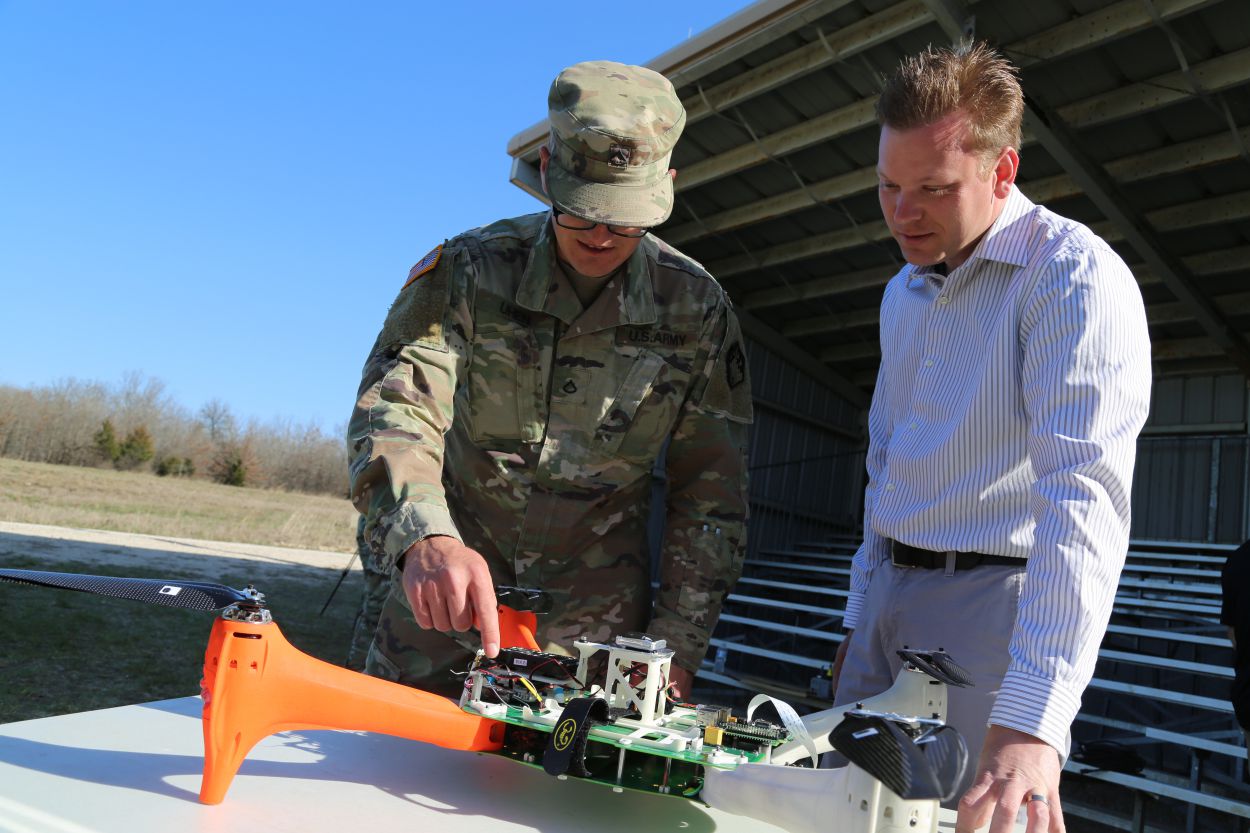 The future of the RDECOM C&B Center autonomously cued aerial detection system depends on the evaluations of the benefits it provides to Soldiers, the improvements made during these evaluations, and, most importantly, having partnership agreements within the Department of Defense to move forward with the research and development.

“My hope after MSSPIX is that we get some solid transition agreements and that this equipment ends up being part of a program of record,” said Williams. “Once we transition this technology, we want to keep developing the system so it can accurately fill any materiel gaps and other requirements the owners may have.”