The U.S. Army Combat Capabilities Development Command Chemical Biological Center unveiled a permanent reminder of the relationship between Soldiers and Army researchers on June 17 in front of the Center’s Advanced Chemistry Laboratory.

The statue’s more-than-two-year journey began as the brainchild of Frederick J. Cox, Ph.D., the Center’s director of research and technology.

“There was an idea to have a statue or some ceremonial focal point and we thought that Centennial Circle should really have something in it,” Cox said.

That notion, which began in 2016, integrated into the 100-year anniversary celebration.

“The initial idea was to depict a Soldier, but Peter Emanuel [senior research scientist for bioengineering] had the idea of having a few different designs and having people vote on them,” Cox added.

“I had about a week to complete the three concepts,” Gitlin said, “I did most of the work at home in the evenings, but I wanted to make sure that the statue would be worthy of the 100-year Center legacy.”

Gitlin said he found himself focusing on the modern-era Soldier. “I wanted to put my own twist on it to make sure it had layers of meaning. I wanted to capture the key relationship that the Center has with the warfighter.”

“Clearly, we are here to serve the Soldier and honor the Soldier’s sacrifice, but a lot of people here have sacrificed and have given a lot to support the Soldier,” Cox said. “Folks here have been injured. Folks died here during WWII in support of the Soldier.”

“Together, we can overcome one of the greatest and most terrible threats mankind has ever known – chemical and biological warfare,” Gitlin said. “Through innovation, research and perseverance the Center has been a critical entity over the course of a century in the chemical, biological, radiological and nuclear (CBRN) mission. What better way to highlight the role and relationship the Center has with the Soldier than by showing a warfighter outfitted in modern-era CBRN PPE and a scientist, shoulder to shoulder, standing strong together?” 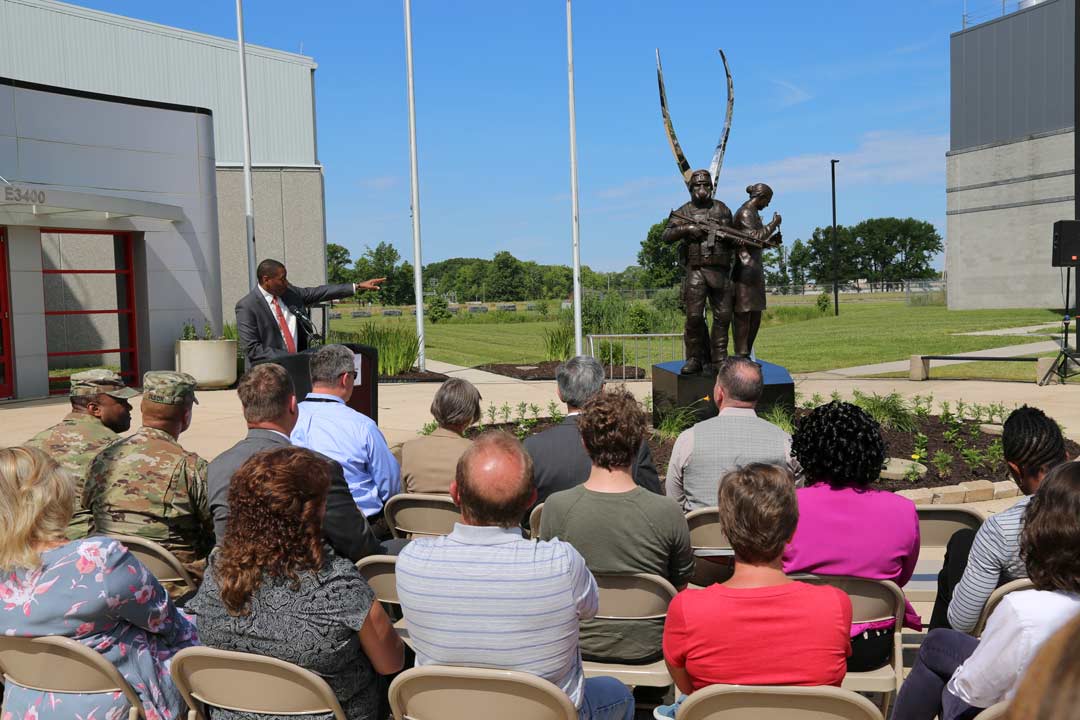 Seasoned warfighter Williams agrees. “We win wars because we have scientists and engineers who do the hard work back here. And I think this is paying homage to them, as it should be,” Williams said.

Williams has first-hand experience in recognizing the symbiotic relationship between the scientist and the Soldier.

While deployed in Iraq, Williams said he was working with a new system and because it was so brand new, he often had to rely on the scientists who developed the system for insight on the equipment and what “right looked like.”

“The understanding that they provided me allowed us to save lives in theater, so I know the importance of this relationship,” Williams shared.

“I found the statue embodied the idea that the scientists here at the Center had the back of Soldiers,” he said, “and the use of the stylized double helix emphasized that defending our nation is as baked into our own civilian scientist’s DNA, as it is in the Soldier’s.”

“This is not only the title of the statue, but the perfect embodiment of the Chemical Biological Center,” Gitlin said.

Gitlin said his commitment to the statue didn’t end with the concept generation.

“I wanted to ensure the execution and realization of the design was done correctly as well,” he said.

He participated in 100th Anniversary planning meetings and provided guidance for the manufacturing of the statue. As work progressed, he received photos from the contactor. “I was involved in critiquing the work, and requesting aesthetic and anatomical revisions. When the statue was delivered, I inspected it for damage and managed its secure storage,” Gitlin said.

With the statue unveiled, Gitlin reflected on the experience.

“It has been an honor to leave such a profound mark on Aberdeen Proving Ground and represent the Center’s 100 year history,” he said.

During 100th Anniversary planning, committee members decided to bury a time capsule next to the statue. The Center continues to collect items and will inter the capsule in the near future.