CBOA Provides Opportunities to See New Technologies in the Field

CBOA Provides Opportunities to See New Technologies in the Field

The Chemical Biological Operational Analysis (CBOA), developed and executed by the Defense Threat Reduction Agency (DTRA), provided researchers an opportunity to elicit warfighter feedback during the technology development process. DTRA is responsible for managing and integrating the Department of Defense chemical and biological defense science and technology programs. According to the DTRA website, CBOA facilitates a collaborative working relationship between academia, government and industry and supports identification, assessment and dissemination of emerging and mature technology information and the acceleration of delivering capabilities to warfighters and those they support. Analysis results, provided to researchers after the event, are intended to aid and inform advanced technology development. The week-long event drew hundreds of scientists, engineers, warfighters and stakeholders to engage in meetings, discussions and demonstrations of emerging technologies.

“Feedback from the warfighter on developing technologies is like gold to researchers,” said Eric Moore, Ph.D, director of the CCDC Chemical Biological Center. “It’s very valuable and once obtained, can be a game changer. Any researcher developing warfighter-centric technology for the Department of Defense views warfighter feedback as one of the most important components in the development process.”

The CCDC Chemical Biological Center showcased six technologies at CBOA with 26 subject matter experts in attendance as warfighters conducted simulated missions on Camp Dawson training grounds, putting some of the more mature technologies through their paces. After each mission, warfighters provided feedback to researchers which allowed for open discussions about each technology. 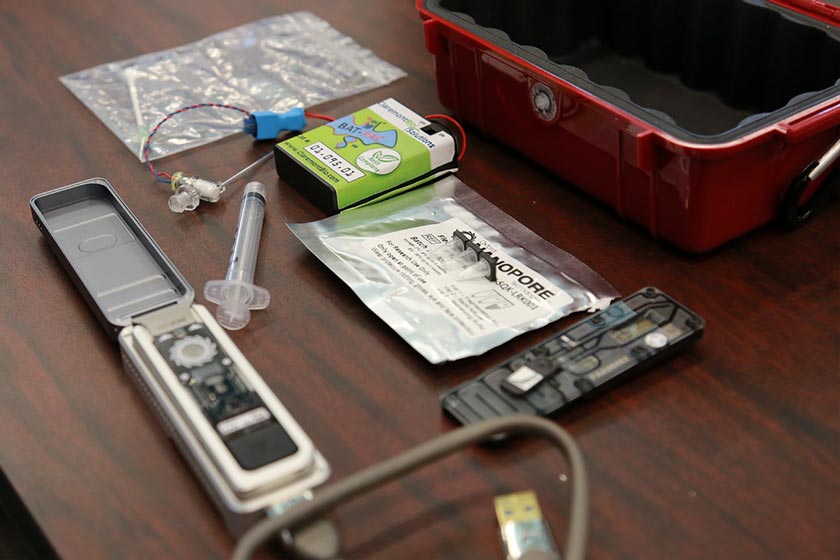 During CBOA, the MinION was carried by several warfighters throughout the week’s field exercises.

MinION, a commercial-off-the-shelf chemical and biological sequencing system, was one technology some warfighters carried during the simulated missions.

“First, we’re pleased with the durability of MinION which survived all three days of missions,” said CCDC Chemical Biological Center researcher, Cory Bernhards, Ph.D. “It bounced around in a mini Pelican case every day but still worked and was able to complete its job.”

Bernhards and his team have been refining sampling protocols for the MinION system, and were excited about how well MinION performed.

“It sequenced a sample in just 35 minutes, which to our knowledge, has never been done,” he said. “Usually sequencing takes approximately 24 hours.”

“MinION’s overall performance plus all the warfighter feedback we received during the hotwashes was invaluable to our team. We’re really pleased with what we’re heading home with,” Bernhards said. 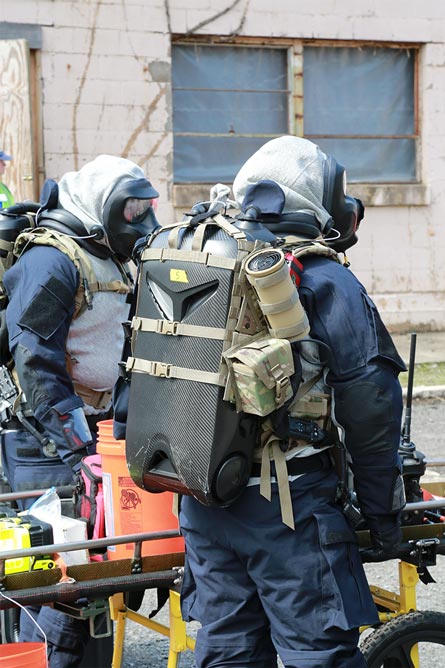 Another technology that received field time with warfighters during CBOA was the Full Spectrum Respiratory Protection System (FSRPS).

Developed collaboratively by researchers at the CCDC Chemical Biological Center and Soldier Center, the backpack allows users to have extended operating time in comparison to the more widely known oxygen tanks used by firefighters. The team’s approach provides users with two options for protection — one setting filters air from the environment to the user while the other setting, a closed circuit system, provides recirculated air to the user, a higher level of protection. The FSRPS also provides cool air with both settings as well as a way to drink water while wearing the ensemble, two features unavailable with other similar suit systems.

The team plans to conduct some additional research to improve the system overall, get more user feedback and influence potential future requirements.

In addition to the technologies tested by warfighters, Center personnel demonstrated five other developing technologies.

VK3 is a field-deployable liquid chemical identifier that uses a built-in camera and computer to analyze an assay and identify the substance.

BioACER, a detection platform for biological agents, prevents the need for the warfighter to go into a contaminated area. Instead BioACER is delivered to the site in question by drone and sends feedback to warfighters who remain out of harm’s way. BioACER was showcased at CBOA by Cory Bernhards, Ph.D., Katherine Broadway, Ph.D., Phillip Mach, Ph.D., and Aleksandr Miklos, Ph.D.

A brand new technology brought to CBOA was the Pocket Detection Pouch (PDP), a field-forward self-contained, power-free sample collection and identification pouch for liquid and powder chemicals. The pouch has a small footprint, is lightweight and very easy to use. The pouches are customizable for the users’ needs, meaning different sampling papers can be included in the pouch. Designed and developed by Jennifer Sekowski, Ph.D., and Kelley Betts at the Center, the pouch is still a prototype, which is why CBOA was a great opportunity for the researchers to garner feedback on their idea early. 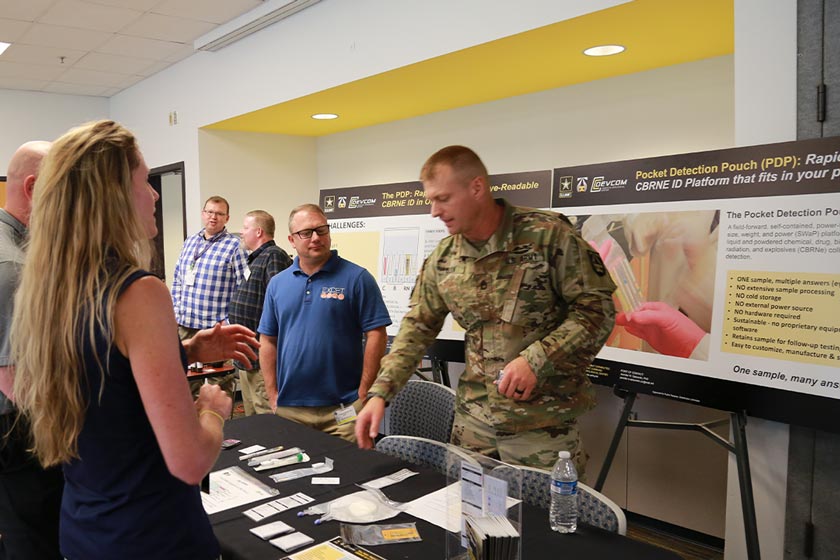 “We received a lot of positive feedback from warfighters about PDP,” said Sekowski. “Form factor was appreciated by all as was the ease of use. We’re coming away from CBOA with a clearer path forward to ensure what we develop meets warfighters needs.”

Paper spray, an ambient ionization technique, uses a paper substrate to introduce ions into a field-portable mass spectrometer to detect chemical warfare agents from a wide variety of environmental mediums such as water, air and soil.

“The concept is there, we just need to produce a working prototype pairing our input and cartridge system with the mass spectrometer,” said Mach, a research biologist. “In speaking with the Army and Marines this week we received quality feedback about the form factor and usefulness of paper spray.”

The CBOA event, while only in its second year, has proven instrumental in providing researchers supporting the DoD with quality feedback necessary to develop unique, warfighter-centric technologies
that will modernize and elevate the nation’s armed forces.

During his morning address to community of interest members on the final day of CBOA, DTRA Director for Chemical/Biological Technologies Ronald Hann, Ph.D., summed up CBOA and the mindset of everyone in attendance, “Through challenging the limits of technologies, we’re all learning and trying new things for the benefit of the Solider. We’re doing the right things early for Soldiers.”