Researchers at the U.S. Army Combat Capabilities Development Command (CCDC) Chemical Biological Center are exploring the use of synthetic carbon as a filtration material against chemical warfare agents and toxic industrial chemicals.

Gregory Peterson and his team in the Center’s Chemical, Biological & Radiological Filtration Branch, with funding from the Defense Advanced Research Projects Agency (DARPA), are working with a biologically engineered material developed by researchers at the Massachusetts Institute of Technology (MIT).

The seed of Peterson’s idea began when DARPA, working with researchers at MIT, contacted Peterson to ask if the Center could evaluate and help optimize the material that MIT developed from templated bacteriophage.

Bacteriophage is a parasitic virus that takes over its host, mimicking its DNA as the virus reproduces. This synthetic biological process lets scientists tune biological systems to produce molecules that are difficult or impossible to produce otherwise.

“In its current form it is less than half the packing density of our traditional coal-based carbon,” Peterson said.

Peterson has also discovered that BioCNF has the ability to filter a broader spectrum of toxic chemicals than its mined counterpart and even other engineered sorbents or porous materials like metal organic frameworks (MOFs).

“We are systematically changing the heteroatoms – elements such as nitrogen, oxygen, etc. – to tune adsorption/reaction behavior,” Peterson explained. “The carbon nanofibers are some of the best sorbents we have seen. Without being optimized, they have better broad-spectrum capacity than current filtering substances.”

In other words, without further manipulation, the carbon nanoparticles have already proven themselves superior against many toxic chemicals. Peterson says that researchers can use it as a scaffold to incorporate other active metal nanoparticles for enhanced capacity and reactivity.

There are plans to create engineered particles by integrating the BioCNFs with additional active materials to make lighter and more efficient filters and suits, creating less encumbrance.

A warfighter with superior protection and agility is more lethal on the battlefield. 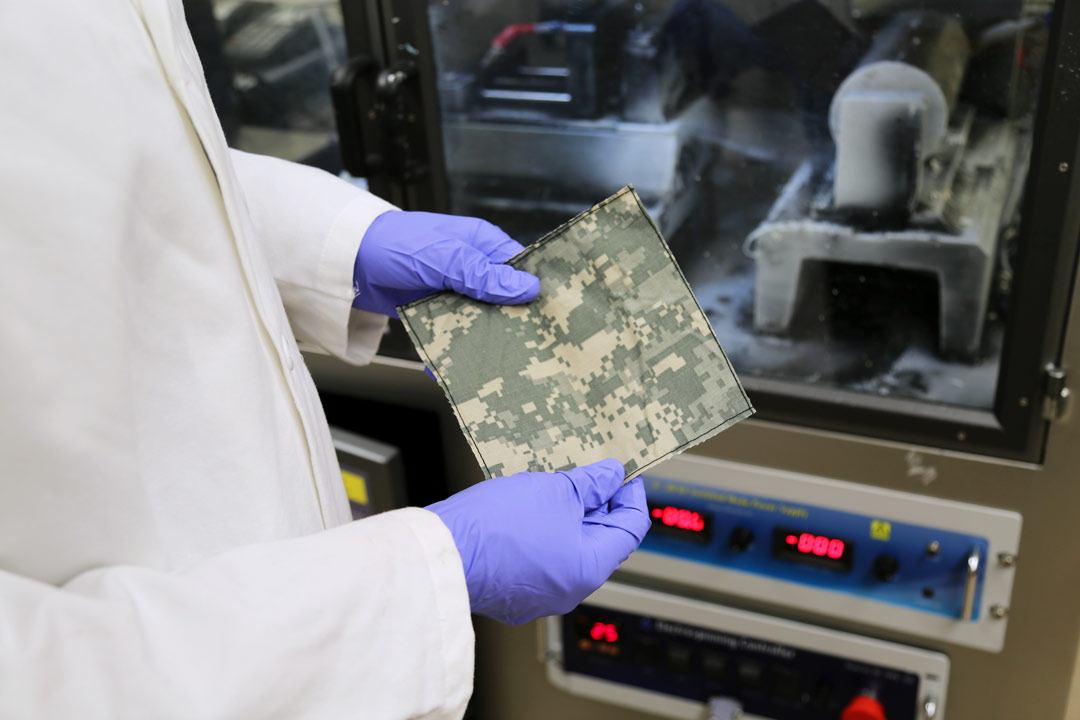 Fabric engineered with BioCNF’s could provide warfighters with superior protection against agent threats.

Peterson foresees using BioCNF in a functioning suit and/or mask in the field within the next 10 years but says there is still a lot to learn about the nanofiber, including its scalability and suitability to further engineering.

“Right now, the substance is a powder,” Peterson said. “You can’t put powder in a filter, because you can’t breathe through it.

“We could really ramp this up to begin putting it into filters and suits,” Peterson shared.

“Working with DARPA and involving just the right partners in the public and private sectors could advance this project more quickly.”

Peterson has already shown proof of concept by combining the synthesized carbon with a polymer, using the electro-spinning process.

“We form a composite fiber using a solution of polymer, high voltage, a needle and a collector plate,” Peterson explained. “We add the BioCNFs as a suspension in the polymer solution and then electro-spin it into the composite fiber, which can then be incorporated into a textile for a protective suit or as a flexible low burden filter.

“Working on a separate program with DTRA [Defense Threat Reduction Agency], we are looking toward a self-sealing suit that would close exposed areas, preventing spread of the agent,” Peterson said. “If we can absorb an agent that has the potential to penetrate a warfighter’s protective suit, if we can react quickly enough before it seeps through to the skin, that’s a benefit to the warfighter.”